The little gun that could… and can again.

My good friend Dale Annis is the proprietor of Annis Arms in Ellendale, Delaware. Recently, he blind pinned and welded an extended flash suppressor on my USGI M4 barrel to make it civilian legal. His workmanship is top notch.

During a recent visit, he showed me one of his latest projects. A relic from a forgotten era, a Mossberg Brownie! A diminutive four barrel .22, it was better than nothing in your pocket!

The barrel unit on the client’s pistol shown here has a matte finish as opposed to the crappy nickel finish on the rest of the gun. The original barrel set was nickel as well but the head space was shot so Dale found a replacement. Must have been like searching for the Holy Grail!

Another problem was the barrel locking lever. The original was worn, so lockup with the new barrels was poor. The only solution was a new lever. While Dale is an excellent machinist, creating a new locking lever would require copious amounts of hand filing and fitting.

The fruits of a LOT of labor! Better than from the factory as well.

The small slot in the top is for a small strip of steel that was pulled out and used to pry out the fired cases during reloading since the cheap roscoe had no extractor!

The business end of things. The pistol now functions better than new. The only thing left is a proper nickel finish on the entire gun. 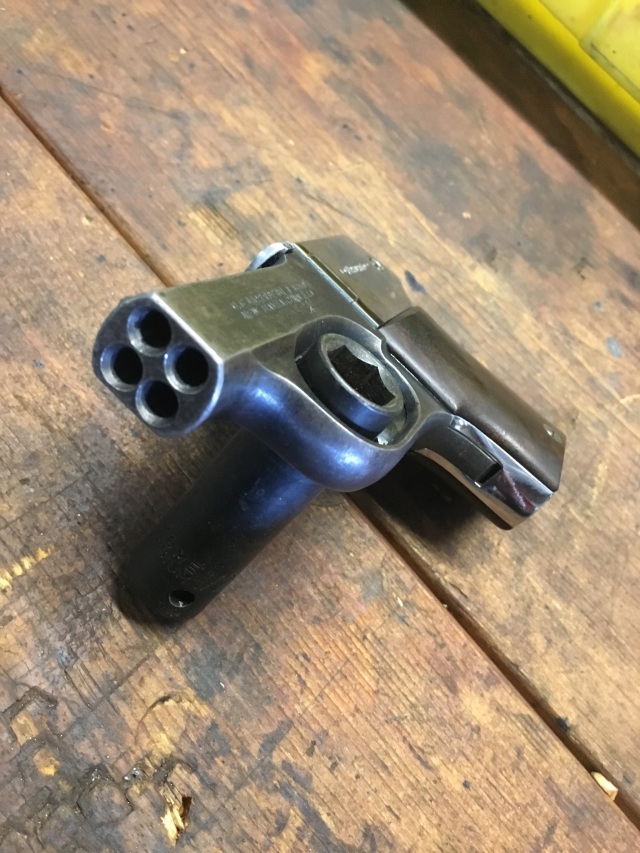 But why would someone pay for so much labor to resurrect such a stinker of a hideout gun?

Did it once reside in the garter wrapped around Mata Hari’s thigh? Nope. Was it once Franklin Roosevelt’s sleeve gun? That would have been cool.

Sorry, but the alleged story is that this wee gat was the property of Al Capone’s accountant!

Well this little four banger didn’t set the shooting world on it’s ear. I guess the idea of a four barreled backup is doomed to failure. The notion was revisited some years ago with the latest Edsel of undercover arms. The .357 Magnum COP (Compact Offduty Police) died on the vine in short order as well!

4 Responses to The little gun that could… and can again.