This is the latest iteration of the first pistol I built. It is based on a Federal Ordnance 1911 frame I acquired in 1990. It’s original layout was that of a stock M1911A1. Over time, changes were made, The first upgrade was the fitting of a Videki trigger paired with an Ed Brown sear/disconnector set. At the same time, I replaced the GI hammer with a lightweight “Commander” style hammer from Ed Brown. The new hammer required a beavertail grip safety for clearance. The beavertail also made firing the .45 more comfortable while allowing the firing hand to sit higher up on the grip. One thing constant about the pistol through its evolution was that it was not destined to be pretty. I stayed with the parkerized finish as I meant for this pistol to be used hard and not babied. As a result, the pistol carries the wear marks of it’s years. Most noticeable is a rub line on the right side of the frame from an old Mueschke ambidextrous safety that I had tried for awhile.

Later, I replaced the GI recoil spring with an 18lb. unit from Wolff. The spring runs on a one piece full length guide rod from Wilson Combat. An interesting note is the old style M1911 smooth, flat mainspring housing complete with lanyard loop. Poor man’s impact weapon or the ability to attach a lanyard? You decide. Unseen from this angle, I had hand filed the magazine well to ensure that speedy mag changes were fumble free.

One problem with the USGI slide is that the small ejection port usually tears up the ejected brass upon firing. I had my buddy Dale Annis from Annis Arms in Ellendale, DE lower and flare the ejection port to ensure that the ejected brass would be undamaged for later reloading. Growing weary of the tiny USGI sights, Dale milled a dovetail into the slide to permit a much improved front sight to be installed.

Sitting in the unaltered rear dovetail is a unique replacement for the tiny issued rear sight. I installed the #2 prototype of the Springer Speed Sight. In conjunction with the new sights, I added a modern touch. A CrimsonTrace laser was mounted in place of the old plastic 1911A1 grip panels. 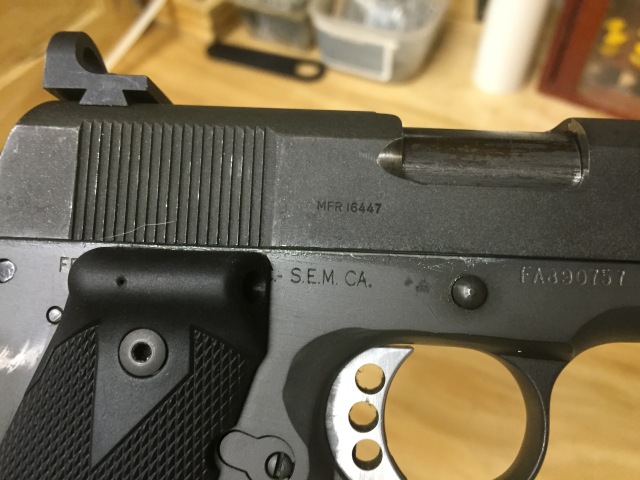 More on the Springer Speed Sight. Developed by Horace L. Springer, Jr.; patent #5933972, it is a combination of an open notch and an aperture sight. This particular sight was the second pre-production model made before EGW started manufacturing them. I was given this sight as a thank you for my work in the product demonstration film.

Secured by two set screws it is a rugged unit. It’s shape facilitates one handed cocking against a boot heel.

Firing on an IPSC target; with the front sight blade nestled in the notch, the pistol shoots to point of aim at 20 yards.

Firing center mass quickly on the same target at 5 to 15 yards; with the front sight anywhere inside the mushroom outline, produces good groups in the thoracic area. 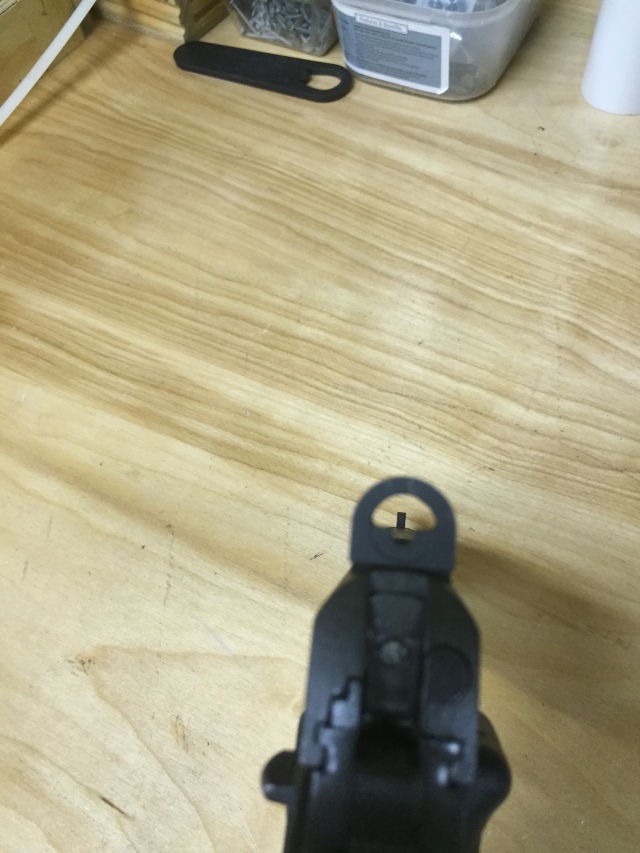 Another modification performed by Dale was a long shallow ramp on the underside of the slide. Please forgive me for photographing the pistol right after firing. I had heavily greased the recoiling parts for the initial break-in of the new slide. The ramp allows the slide to move forward;  gently depressing the disconnector, instead of the breach face hitting it. Now the slide goes into battery smoothly without the noticeable hitch in some stock 1911s. The ramp is wide enough to clear the disconnector, while the resultant “legs” still have ample surface area to feed the next round from the magazine.

2 Responses to A twenty five year project so far…